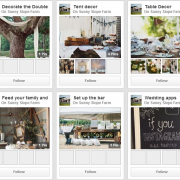 I have been browsing around many wedding websites lately. There are so many great ideas, wonderful articles and a huge amount of pictures. As I looked at all of these I realized how many great ideas there were for persons who might be celebrating a special event On Sunny Slope Farm. Ideas for how to decorate the tent, what to do with the bar, ways to set up for ceremonies, how to help people find their way to their seats and a whole bunch of other things.

So created a Pinterest account for On Sunny Slope Farm. I would love it if you would go and check things out if you happen to like that kind of thing.

Also I would appreciate knowing if any of you have Pinterest boards that I can follow. If so please let me know. Happy pinning! 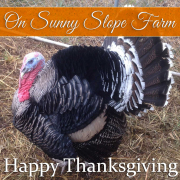 I am so thankful for many things this year!

I am back on the farm after many years in my family home place since 1828.  2 children are married and the 3rd has a special other. My 1st grandson turned one year old.  I have a lovely wife.  And I love what I do.  I get to help people celebrate their family and friends in a beautiful place On Sunny Slope Farm.

I am especially thankful for the many couples that got married this year on our farm and those that we helped get married in other places.  I am thankful that I was able to meet their family and friends and celebrate together.

I trust that you have similar things to be grateful for.

Have a Happy Thanksgiving.

Always celebrating with you, 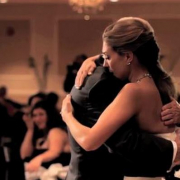 This bride’s father passed away before her wedding and so her brother did something special for her.

Jennifer Dayton and Ben Moyers were married at Sunny Slope Farm in June 2013. The farm, which has been in the Wampler family for generations, recently opened as a special-events venue. (Photo by Courtesy Photo)

During the early months of 2011, Harrisonburg native Sarah Jarrett was a bundle of emotions.

On one hand, she felt excited about being engaged to her fiancé, Jeremy Whitmore. On the other hand, she was both nervous and anxious about the fact that she had nearly 300 family and friends hoping to attend her summer wedding — a number in excess of most local venues’ capacities.

Then, one day while visiting her father, Harry Jarrett Jr., at Sunny Slope Farm — the place she called home her entire life — an idea began to take root.

She knew that Sunny Slope Farm was large — 67 acres to be exact. She knew that it was a venue with beautiful scenery. She also knew that her father is a very organized and savvy man who would be ideal to run an event as significant as a wedding. That is when she came up with the idea to have her wedding held at Sunny Slope Farm.

“I knew [Sunny Slope Farm] would be an awesome place to get married,” says Sarah. “There’s a 360 degree view where you can see everything — that’s part of the reason I wanted to get married there.”

In June 2011, Sarah Jarrett became Sarah Whitmore on a day that she describes as “perfect.”

“My great-great grandfather, John Wampler, bought this land back in 1828,” says Jarrett, as he points to the original deed, which hangs on the wall near the home’s entrance.

“Then, my great grandfather, Charlie Wampler Sr., lived on the farm and his son, Charlie Jr. — my grandfather — was born right upstairs in this house.”

One of the distinguishing factors of Sunny Slope Farm is its rich tradition. In the early 20th century, Charlie Senior revolutionized the process of artificially inseminating, hatching and growing turkeys, which was a breakthrough achievement at the time.

Wampler’s achievement led to his spot in the American Poultry Hall of Fame and he is widely known as the father of the modern day turkey industry.

The 97-year-old Charlie Junior lives in a grey house on the farm and, on Nov. 12, he will celebrate his 75th marriage anniversary with his wife, Dot Jarrett, and a few close friends.

While the Wamplers will hold a modest celebration that day, Sunny Slope Farm, is capable of holding much bigger events.

Sunny Slope currently serves as a venue for weddings, along with a number of other celebrations, including quinceañeras, post-graduation parties and fundraiser events. Jarrett has a variety of roundtables and chairs, a dance floor and a 40-by-120 foot tent available for use. A dressing area and private bathroom is are available on site.

Following his daughter’s wedding, Jarrett says that he and a couple of other family members pondered the idea of turning Sunny Slope Farm into a business venue, given the available space. Jarrett ultimately decided that the idea was worth pursuing and he began to make the necessary moves in order to open the space to the public.

“We opened up for business Sept. 1 of this year,” says Jarrett, who is also an ordained pastor. “[Sunny Slope Farm] has hosted four or five weddings this year, and we’ve already got five booked for 2014.”

However, the process of formally adding this dimension to Sunny Slope Farm was not a simple one. Jarrett underwent an extensive process of working with the county in order to make sure everything was in order according to public regulations and ordinances, while still adhering to the integrity of the farm. This two-year process included attending public hearings in which public officials weighed the pros and cons that come with achieving this special-use permit.

Jarrett received the green light from the county earlier this year.

“[The county] decided that what I was going to be doing would not impact the character or agriculture of the farm, which is important to me,” says Jarrett. “I appreciated the process.”

One aspect that separates Sunny Slope Farm from other venues is the scenery, which is used as a backdrop for a given event. Atop the pad of the farm, where events are held, onlookers catch glimpses of the Blue Ridge Mountains and the Massanutten Peak.

“The views here are incredible,” says Jarrett. “You can see Bridgewater and Dayton off in the distance. You can even see when people shoot fireworks. If fireworks are anywhere in the Valley, you can see them from here.”

While the setting may be picturesque, the service provided by Jarrett comes at a close second.

While serving as a pastor for more than 20 years, Jarrett has conducted a countless number of weddings and ceremonies, which, in turn, helped hone his ability to organize and achieve a successful event.

“Working with brides and hearing all of the stories about what can happen when working with vendors gave me a unique perspective,” explains Jarrett. “I try to offer as much as possible at a very reasonable price.

“I don’t believe couples should have to endure a huge amount of debt in order to have an absolutely wonderful, beautiful, and well-executed wedding.” 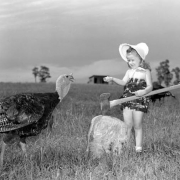 If you like turkey, you have a Virginia farmer to thank for domesticating the big bird. Virginia is the cradle of the modern turkey industry. Up until the early 20th century, if you wanted a turkey to cook, you had to shoot one in the wild. Then in 1922, an ingenious Virginia farmer devised a way to brood (incubate and hatch) turkeys from eggs. Charles Wampler, Sr. became “the father of the modern turkey industry.” Today Virginia produces 526 million pounds of turkey a year — that’s 24 million birds — and ranks fourth among the states in turkey production.

Turkeys are native to North America, and “The Old Dominion” is the original turkey-farming state. The industry began in the Shenandoah Valley in the 1920s. Charles W. Wampler, Jr., chairman of the board of directors of Wampler Foods, Inc. before it was sold to Pilgrim’s Pride in 2000, tells the history.

“Back when I was a kid, we had 12 to 15 turkey hens that ran loose on the farm. In the spring when the hens would go into the woods and lay their eggs in a nest, my first job around the family farm was to find where they hid them, gather the eggs, and bring them to my dad.”

“Dad” was Charles W. Wampler, Sr., the founder of the National Turkey Federation, was also the first to contract with farmers to grow chickens. In those years, he was the county agent for Rockingham County and Page County.

“Dad had a small shed kind of like a big dog house with a little oil stove in it to keep the eggs warm. It took 4 weeks to hatch a turkey egg. Then he would let the turkey hens out and they would lead the little birds around the farm just like a wild turkey would. There was no turkey feed in those days. My mom mixed hard boiled eggs with cornmeal to feed them,” relates Wampler. Appropriately for a turkey producer—and a turkey producer’s son—Wampler was born on Thanksgiving Day in 1915.

“In the old days, a man went out and shot a wild turkey. There were no domestic ones. All turkeys were wild. Today all the romance has gone out of the turkey business. We grow hens in one house and the toms in another. They live their whole lives without seeing the other sex.”

“The bronze turkey you see in Thanksgiving pictures came from wild turkeys. But when you plucked the feathers off a brown turkey like a Narragansett or Bourbon Red, it would leave black dots called ‘Ink’–like polka dots all over the bird–and the dots would stay right there. You couldn’t get rid of them. There was a process of breeding to make turkeys white so no color would be left when you plucked the feathers. That’s what the consumers wanted.”

“Back in those days, you’d start growing turkeys in May and sell them at Thanksgiving and Christmas.” During the late 1940s and early 1950s, there were dramatic changes in the poultry industry. Because of breeding, nutrition, and management breakthroughs, the feed conversion improved, the life cycle of birds was shortened for the same weight gain, and the volume of tonnage increased. Virginia became the top-producing turkey state right after World War II,” said Wampler.

Most poultry in the beginning of the 1940s were free-range birds. Chickens were the first to be confined. It was not uncommon even into the 1950s that the processing plant called the farm family to ask them to keep the flock penned up for the pick-up crew.

In 2005, the oldest turkeys on the market are only 5 1/2 months old. Toms weigh more than hens; that’s the only difference in the meat. Both are young and tender. After roasting, deep frying, smoking, or whatever method you use to cook your turkey, you’re sure to have leftover cooked meat. When you tire of turkey sandwiches and turkey soup, try these recipes for a different twist on enjoying that Virginia turkey.