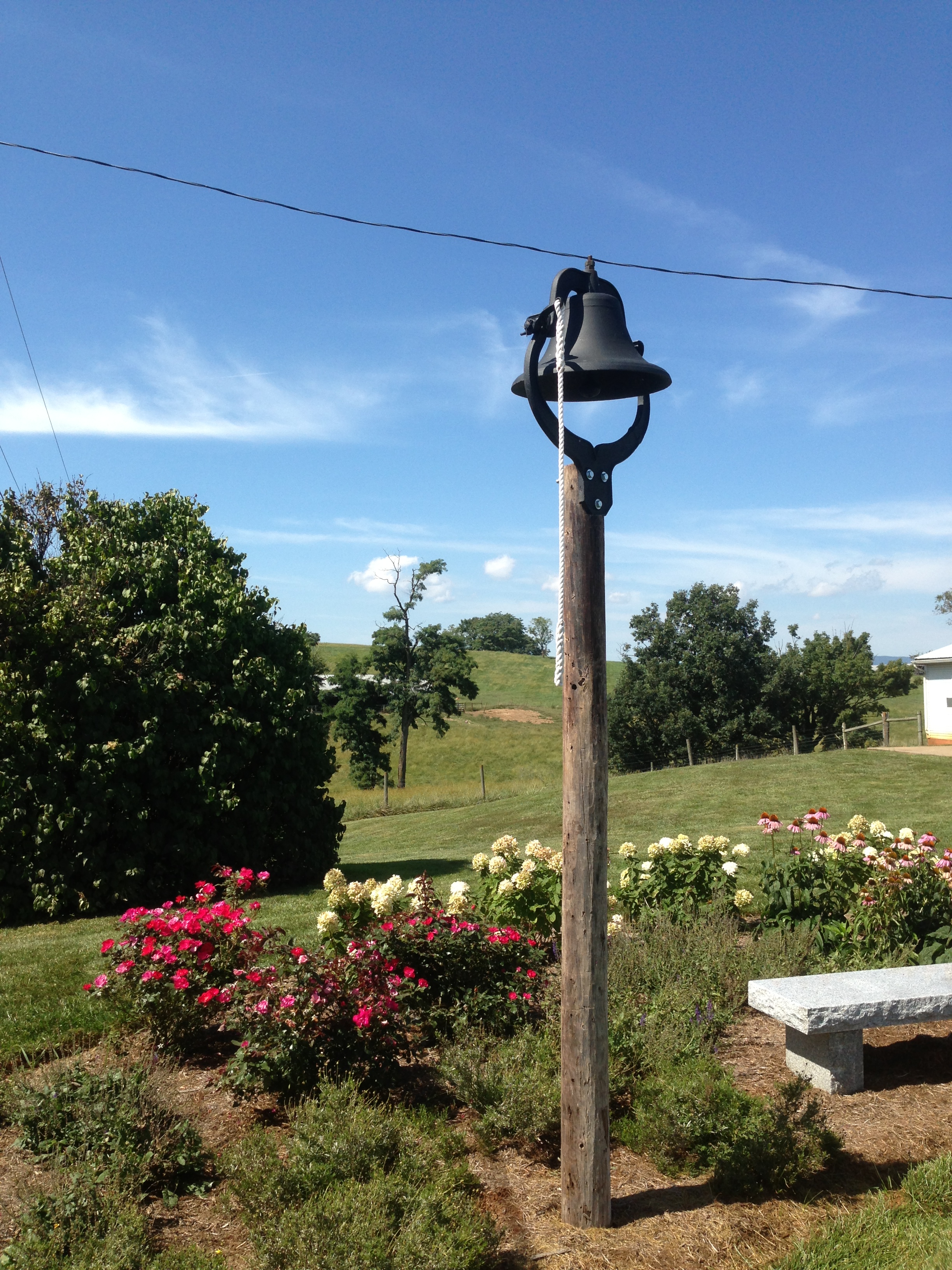 To all of the folks who attended the Wampler Anniversary:

We were glad to have you at Sunny Slope and hope you can come again sometime when we will be able to visit and get better acquainted. But don’t all come at one time, please.

The committee has requested that I write and tell you a few things that I would have said had the rain not interrupted our program. You might want to add them to your book.

First, the pear tree that some of you were leaning against, was one from which I have eaten pears every year for 75 years. There were three trees there when I was a boy, and this one was much larger and prettier than what it now is. The big walnut tree that shaded some of you is the same age that I am. As near as I can tell, all the other trees are younger. The big maple trees in front of the house were planted by mother and I in 1905, soon after father’s death.

The well, that you walked over as you went into the old log house, was the only refrigerator my mother had. We hung the butter, meat and such like, down to the water edge in a bucket by a rope. We had plenty of milk but usually drank it up before it had time to sour.

There are still a few shingles available for souvenirs that came off of the roof of the old barn, about 150 years old, and one of the very few barns that escaped being burned by the Northern army when they claimed that they had left the Valley so depleted that a crow flying over the Valley would have to carry its lunch with it.

The bell that we rang to call everyone to lunch on reunion day, I have no way of knowing how old it is. When I was a boy, most all families in the neighborhood had one clock. Father was one of the few men who carried a watch. Church bells were used to call people’s attention to any kind of service we were going to have. The farm bell was used to call people to their meals and in case of emergency. We boys worked on the farm over the hill away from the house and we learned to know all of the different bells in the neighborhood. Of course they were good music to us boys. Abe Swartz who lived on the highway between Dayton and Dale Enterprise was always first to ring the bell for lunch, about eleven o’clock. Pete Heatwole come next, he lived near Dale Enterprise. Then on up until twelve o’clock other bells would be ringing, most of them very c1ose to the same time each day. Ours usually rang to give us time to be at the table a few minutes before twelve o’clock. Mother usually knew where we were and what we were doing and just how long it would take us to get to the house. So she rang the bell accordingly. Usually she had to allow time for us to get into the barn, water the horses, put then away and feed them. The same thing was repeated in the evening about five o’clock. If the bell ever rang except close to meal time or longer than just a few minutes, neighbors would know there was trouble and would come rushing across the fields to see what they could do to help. The bell was our only way of distant communicating with our neighbors. There were no telephones. Frequently we would find that there had been an accident or someone had become suddenly sick. If some member of the family had not already gone for the doctor, one of the younger members of the neighbors would mount a horse mid take off to find a doctor. One of the things taken in mind at that time, in selecting a family doctor, was whether he had good fast horses so he could conic quickly. When anyone died, the clock was stopped and the family bell was rung for about half an hour.

A number of folks wondered how a family of five boys and two girls could live in a house as small as the old log house in the yard, which you visited on reunion day. The family only lived in this house while they were building the new house, and the boys slept in the barn. But these are the original logs that were first in the house back on the road where George Washington passed by, and later was on the same foundation of the house in which we now live. The house was made smaller when it was put in where it now stands.

The older young folks missed seeing the bake oven and the ash hopper. The ash hopper was used for making lye for all of our laundry soap. These stood between the dwelling house and the old log house. They disappeared long ago in the line of progress.

I doubt if most of the young folks even know the principal on which the outdoor bake oven operated. This large oven which was made of brick, mortar and limestone was approximately seven feet square on the outside and five and a half feet on the inside. The oven was filled with wood which was burned and after the ashes and coals were scraped out the baking was done from the heat in the floor and walls. How my mother knew exactly the right time to put each of the different things in, put them at the right place and take them out at the right time so that they would be baked perfectly, I cannot tell. But she did it. Of course without the use of a thermometer or any other mechanical instrument. Mother never had written recipes and never had a cookbook until the first Inglenook Cookbook which was published by the Brethren Church. She furnished some of the recipes for this book.

I well remember when my father bought the first kitchen stove which contained an oven so that mother could do some of her baking in the house in bad weather. Even with that, mother seldom failed to have the big baking in the old outside oven on Saturday.

Noted below are corrections to mistakes and omissions in the book. If any of you did not get the books you wanted, I still have a few available.

Corrections for your book:

We would be glad to hear of any other additions or corrections, to help keep the history up to date.

Our Other Web Profiles

Keep dating while you are planning your wedding
Scroll to top