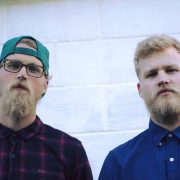 Chris and Harrison are two brothers who have been playing music together for over 10 years. This most recent project of The Lion Brothers consists of instrumental music that embodies their inspiration as musicians and artists. 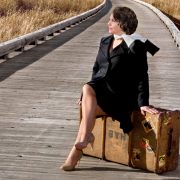 Stephanie Nakasian is an exciting, well‐seasoned vocalist and master of innovative jazz improvisation, completely authentic with a fresh and vibrant sound all her own. Bringing high energy to every perfor‐ mance, Stephanie enthralls listeners with her pure tones and a flawless delivery, engaging them on a per‐ sonal level with a love for the music that is playful, electric and spontaneous in story and song.

Then & Now: Stephanie came to international attention in the mid‐80s when she sang and toured with the vocal jazz master Jon Hendricks and Company – what she considers her “vocal jazz apprenticeship.” She continues to tour and record as a vocal leader with her partner and internationally acclaimed jazz pia‐ nists Hod O’Brien or improvisational master, Harris Simon.

Recordings: With 26 recording projects, Stephanie continues to be an active recording artist. Her debut CD “Comin’Alive” (V.S.O.P.) featuring legendary saxophonist Phil Woods received four stars from critic Leonard Feather. “French Cookin’” (V.S.O.P.) spotlights the beautiful combination of Stephanie’s voice with virtuoso French hornist Bobby Routch. Her “Bitter Sweet” CD (JazzMania) is highly lauded along with “Escapade” as she takes the audience on a fantasy swing voyage and her “Lullaby in Rhythm” in tribute to Kenton singer June Christy featuring saxophonist Harry Allen. In 2006 two CDs were released: “Thrush Hour” (VSOP), a tribute to 20 great jazz singers including a 20 page booklet co‐authored by Scott Yanow with pictures, bios and educational tips as to how to listen to each singer to hear the nuances of style and

“Swing Journal” in which they called Stephanie “the perfect jazz singer.” 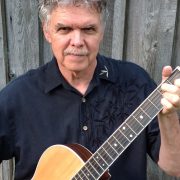 Originating from Texas, RW Smith began studying classical music, taking to the guitar with rock-n-roll flare as a professional performer by the early age of 12.  Performing his way through college and beyond, his influences included Michael Hedges, Pierre Bensusan and Liz Story as he began to compose an original style of progressive music he coined “cow jazz.”  In addition to pursuing a solo career, bands have included, The Landsman, Tallgrass, Bradford & Wolcott and Molimo, to name a few. Today RW’s deep voice and mastery of the strings and keyboard see him performing solo as well as in harmony with other artists both live and in-studio. Additionally a producer and audio engineer, RW is owner of Azurat Studio in the Blue Ridge Mountains of Virginia (www.azurat.com), actively engaging in a broad spectrum of artist’s needs; from composing, scoring for film, recording, mixing and providing live sound reinforcement services.  RW enjoys working with all genres of artists, burgeoning and professional, as he helps them expand their talents and creative enterprises. 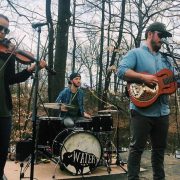 Born out of the vibrant college based community that is Harrisonburg, Virginia, Strong Water has experienced life as a project like most bands. Members have come and gone, the sound has changed slightly and matured as those involved have matured, but the vision and energy which has carried the group for so many years still remains the same.

What originally started as a duo, swelled to become a six piece before settling on it’s now-three dedicated members whose performance is built on strong Male and Female lead vocals supported by harmonies, driving Acoustic/Electric Guitar or Banjo parts, well crafted melodic Fiddle lines, rounded out by tasteful Drums/Percussion, and an Upright or Bass Guitar depending on the show. Strong Water’s eclectic collection of original songs and a handful of covers range from genres such as Bluegrass & Blues, to their personal spin on Americana and Folk-Rock, incorporating sounds and styles from influences such as Noah Gundersen, Mumford and Sons, and The Lumineers.

After large numbers of requests from fans who had enjoyed a previous EP launched in November 2014, Strong Water recorded and released a 14 track Debut LP in April, 2016. Armed with their new record and a newfound sense of direction, Strong Water has been busy booking and playing special events, shows, & festivals throughout VA and traveled as far as Asheville, NC to bring their energetic performance to fans young and old.

The band’s fast growing list of performances include opening and playing alongside bands such as Judah & The Lion, Lucy Dacus, Chamomile & Whiskey, The Judy Chops, The Dawn Drapes, Erin & The Wildfire, and many others.